No time for blogging....

Running is little and often still, short runs, very (very, very) slow, but that'll do for now. I have started getting up very early so I can squeeze in a run, at a random Peak District location, on the way to work. I feel extremely lucky to be able to do this!

Enough of the waffle. Here are some pics :)

Posted by OneHillWonder at 00:08 2 comments:

From dusk 'til dawn

I've seen far too much of the period of time between dusk and dawn than I'd care to mention over the last couple of years, but enough of the excuses!

Since Baby OneHill came along, I have a had a couple of half hearted attempts at getting back into running. Unfortunately it's the one thing on the to-do list that gets re-prioritised until it eventually drops off the list altogether, and lurching from new parenthood, to losing my mum, then going back to work and learning how to fit parenthood around working life has all been rather a challenge in itself!

Towards the end of 2014, in an attempt to kick myself up the bum, I ran every day for 40 consecutive days, but although the running was getting better, I crashed and burned in terms of life in general. I could barely function some days, I didn't stop from dawn 'til dusk and was frequently disturbed from dusk 'til dawn! I admitted defeat - running is supposed to be fun, not another chore - but with my new busy life, running cannot be an optional pastime either or it just doesn't happen.

So - this month, I think we have reached a compromise at last. Me and Mr OneHill are doing the 'DODO' challenge (Day On, Day Off; nothing to do with extinct birds I don't think). The rules are simple: we have to exercise every alternate day - in our case every odd day of the month. There is no 'banking'; i.e. we cannot run two days on the trot and then have two days off - if one of us chooses to run on a day off, then a pat on the back for the extra run, but no taking the next day off.

It's working really well for me. Obviously it means running opposing days on alternate weeks, so there's a bit of variety to where running fits into my routine. It's nice having days where I don't worry about fitting it in, but there's enough of a rule that when I have to go, I have to go, so it doesn't fall off the to-do list.

Back to dawn and dusk... One fantastic side effect of having very busy days and fitting in running around everything else, is that I am generally running just after Baby OneHill is tucked up in bed, around 8-9pm, or getting up and squeezing in a run at 5-5:30am before I go to work. I'm loving having the fields all to myself, and running with the dawn chorus or running back towards Matlock's twinkling lights in the evening.

I'm hoping to continue my DODO routine into next month. Here's hoping it lasts even longer!

On 1st February 2014 my mum passed away.
The last thing coherent thing she said to me, the day before (Friday), was "see you Sunday", but for her, Sunday never came.

I didn't wait until Sunday to be there and was by her side, with my brothers and her husband when she died.


Although she had suffered from a long term illness, things only really took a serious turn for the worse in January and in the end it was very quick. Although hard on those left behind, I think that was better for her. It could have been a long drawn out and painful experience - and that would've been so much worse.


Baby OneHill hasn't given me much time to reflect yet, but he also doesn't give me much chance to be too sad, and I feel that little bit closer to him than before.

I didn't have the closest or easiest relationship with her at times, and sometimes I was angry with her for not being a good mother. Other times, I think she did remarkably well considering her own childhood was far from pleasant. When all is said and done, she was still my mum and I'm glad she met her grandson, and saw me become a mummy too. I am glad I was with her at the end.

Today I took Baby OneHill for a brisk walk. We walked along the river path (Baby OneHill staring up, captivated by the trees and sky over him) to Matlock, then through the park and up the aptly named Steep Turnpike... I even resisted Costa ;-)
I walked as fast as I could, even overtaking someone on the steep uphill bit (admittedly a large lady who was walking very very slowly, but with a heavy pram and heavy baby to push it was still pretty satisfying).

As I came back down the hill via the little streets of Matlock, the sun dropped and it took me back to the autumn and winter nights of last year when I was running those roads every night after work. I love the chill in the air, and the contrast of the warmth of the lights in the windows of the pretty stone built houses, as well as the pockets of wood smoke here and there. It was just lovely to be out there, feeling well again for the first time in ages, and with Baby OneHill dozing off in his pram.

Posted by OneHillWonder at 11:04 No comments:

Last year, on 1st September, I decided to do a month of running every day. I think I ran all but one day in October and every day in November too and continued running all but one or two days a month, well into March.

So now I am ready to start running again, and I'm thinking about running every day in December. I'm not too sure how possible it is with a small baby, but our buggy is suitable to run with so the plan is fairly unambitious in terms of what I will run, but I'm thinking a mile or two pushing Baby OneHill every day will really help me to get my fitness back! We live at the bottom of a valley so there're plenty of hills to push him up. Hopefully by December I can get out sometimes on my own too. So far I've only walked with him, pushing him up the hill so I need to brave a few runs asap if I'm going to manage every day in December. We'll see whether I still think it's a good idea by 30th November.... 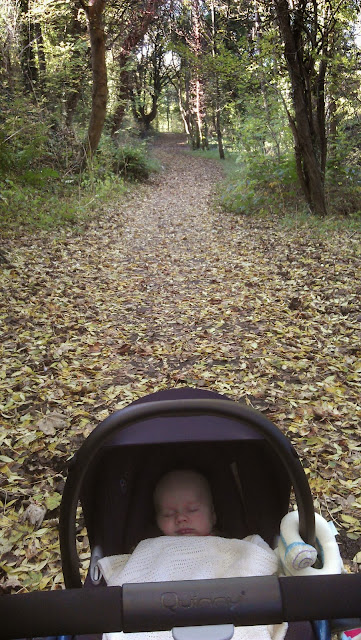 Posted by OneHillWonder at 22:44 3 comments:

I finally plucked up the courage to weigh myself the other day and I'm almost a stone heavier than I was around a year ago :-( Time to start getting back into shape... and into my old clothes more importantly, as nothing fits me! I think it will be a week or 3 until I try running - I am not yet fully healed from my caesarean section - but pushing Baby OneHill up the hill in his buggy will be a good start! I'm just waiting for my cup holder to arrive so I can stop off at Costa on the way - or does that defeat the purpose?! Slowly does it.
Posted by OneHillWonder at 09:01 1 comment:

Well he certainly wasn't keen on making an appearance. He was 12 days overdue when I finally went into hospital to have my labour induced, and there followed a further 30ish hours of trying everything possible to get him to come out the traditional way, before finally, he was born 14 days late, weighing in at 8lbs 3oz, on 5th September, by cesarean section!
He was worth the wait and all the hard work though, and it's difficult to imagine life without him already :-) He's already flexing those legs a lot, so we've locked the cat flap in case he tries to escape through it and out for a run (he should learn to walk first really). 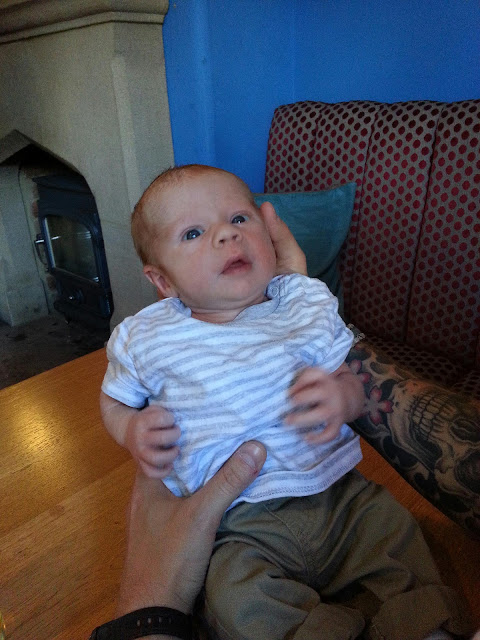 Posted by OneHillWonder at 22:41 3 comments:

OneHillWonder
I am a specialist broadcast engineer. I live in the Derbyshire Dales, love the great outdoors and one day, I might be able to run up a hill..